About ten to twelve years ago, a member of the team I used to manage, a great guy named John Donahue, tried to capture the essence of his manager by creating the following work of fine art.  You’ll notice I am pining away for the great state of Wisconsin, something I did with great regularity and with great effect. 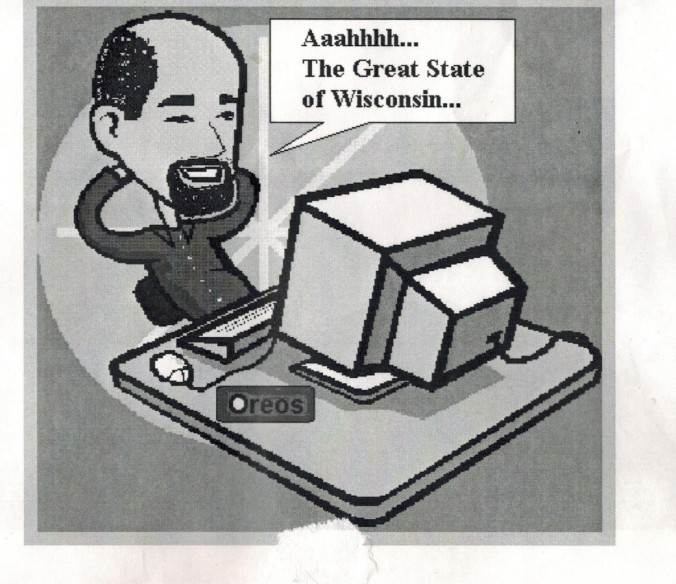 Since my emergency heart bypass surgery in April, people have been asking me how I came to be 99% blocked in one artery and about 90% in two others.  The answer can be found in John’s artwork, in the package of Oreo cookies he placed in front of me. My lifelong love affair with Oreos was no secret, particularly the double stuffed variety, which I consumed by the fistful.

One consumes 140 calories and seven grams of fat for every two double stuffed Oreos eaten.  This doesn’t sound too bad.  The problem is, whenever I’d open a new package of Oreos, I’d pour myself a glass of milk and grab a handful of about six Oreos. That means I was dipping 420 calories and 21 grams of fat into the milk and slogging down the drowned sludge.  Them, if still hungry, I’d often grab a second handful of Oreos, meaning I’d consume easily 42 grams of fat within a few minutes.

Once the package of cookies was sitting in my kitchen, I’d try and go about my business, but I could hear them calling me, like the sirens tormenting Odysseus, and they’d pull me in until I found myself at eleven o’clock standing over the empty remains of the package before I went to bed.   I haven’t bothered counting how many Oreos there are in a package, let’s estimate about forty.  That means it wasn’t uncommon for me to consume 140 grams of fat in Oreo cookies alone in the period of a day.

The problem was it wasn’t just Oreos I was eating.  If it was the night of a Kenosha Writer’s Guild meeting, on my way home, I’d cap off the evening with a Reese’s McFlurry from McDonalds, or a selection from the dollar menu, or an order of hot wings from KFC. I knew these things were unhealthy, but I never did the math, I never added up the volume of fat I was consuming.

Now, I’ve changed my eating habits, and I’m exercising every day.  I’ve dropped about twenty pounds, and just found out that my current total cholesterol is at 119, or about half of what it used to be.

I know, I know, – it’s easy to change your habits after a trauma like what I went through.  The hard part is making the new habits permanent, and resisting the urge to fall back into old habits.  To that end I’m maintaining an Excel spreadsheet where I list the caloric and fat content of many of the foods I used to frequently consume.  Any time I’m tempted to fall back and have one of these old favorites, all I need do is read the spreadsheet to remind myself of how I nearly killed myself.  Below is a portion of the list:

At some point I heard someone describe my blockage and the attack I had as “The Widow Maker,” where the left main artery to the heart gets entirely blocked.  Once blocked, things move pretty quickly and you’re only moments away from starting a new career as fertilizer.

I’m lucky to have survived my own stupidity, and I intend to do whatever I can to remain vertical as long as possible.

5 thoughts on “Recipe for Disaster”